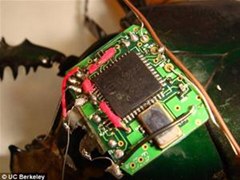 beetles guided wirelessly via laptop. These spy beetles were created with the intent of bugging actual conversations, literally acting as the "fly on the wall". The beetles range anywhere from 2 to 20 centimeters.

"Using implants, they worked out how to control a beetle's take-off, flight and landing by stimulating the brain to work the wings.

They controlled turns through stimulating the basilar muscles on one side or the other to make the wings on that side flap harder.

The embedded system uses nerve and muscle stimulators, a microbattery and a microcontroller with transceiver.

DARPA's ultimate aim is to create cyborg insects that can fly more than 300ft to their target and then stay put until commanded to buzz off again." 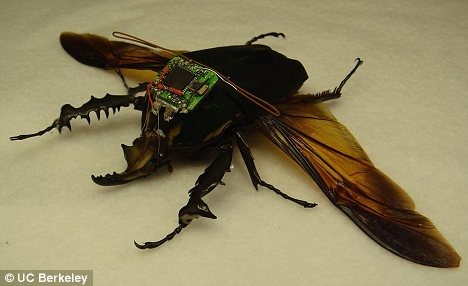 Someone at DARPA must've completely missed the distopian tone of Moreau's Island! Either that, or the job application entails having someone whack you in the head with a huge hammer so there isn't a shard left of your moral compass! Or a brain to speak of.

although the idea behind this is quite interesting (the beetle could be used for spying, scouting, etc etc) its a bit cruel, dont you think?

now i really now the end is upon us...

Movies are like mankinds foretold future, when we imagine we build, right or wrong thats our nature, and weve imaginated some wierd stuff,...definately alot ov brain power but no heart :(

For god's sake, we've got all this equipment that can already do what they're trying to do with this poor animal. laser mics., drones, satelites. how many more lines need to be crossed before they're satisfied? :(