He may have just started his teenage years, but Laurence Rock's future is looking pretty good after inventing an ingenious doorbell device called Smart Bell. He's already sold 20,000 units to telecoms giant Commtel Innovate, and is securing a second deal with an unidentified company that will land him £250,000. That's over $400,000! 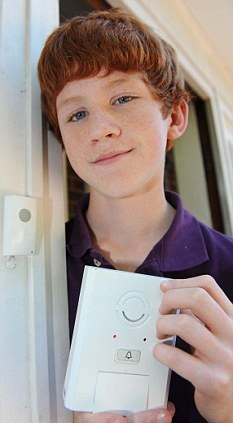 Smart Bell is a device with an internal SIM card that uses mobile phone technology to dial the homeowner's cell phone when the doorbell button is pushed. The gadget even produces some white noise that mimics an intercom system, which tricks the ringer into believing they're talking to somebody inside the house.

The schoolboy from South London was motivated after his school challenged its pupils to invent something spectacular for a competition in the style of reality show Dragons' Den. In the United States, you're probably more familiar with the entrepreneurial-friendly Shark Tank. But Laurence's inspiration for the Smart Bell actually came from his mother, who was constantly annoyed at having to go to the Post Office to collect packages from failed delivery attempts. If no one is home, you can still direct the postman to leave your box at the door, provided no signature is required.

Aside from the potential decrease in delivery grievances, the Smart Bell can also act as a burglar deterrent. Not all, but some criminal thieves actually ring the doorbell before breaking in to an empty property, to make sure the home is actually empty before proceeding. There's a chance you could scare them off when away using Smart Bell.

It sounds like a great security device, but some of the finer details about the Smart Bell seem to be missing. Does the device also ring inside the home or just a mobile phone? Presumably, it does due to the fact that it rings your mobile phone "ten seconds" after the Smart Bell is pushed. But when you're away, doesn't ten seconds seem a little long to get dialed, especially when you tag on the time needed to notice and answer the phone? No deliveryman will wait ten seconds. You'd be lucky if they waited one second for an answer. Hopefully, it will be programmable for individual needs.

We'll see the full power of Smart Bell soon enough when it becomes available for sale. B&Q, PC World, Currys and Comet are all set to stock the security doorbell device, costing £40 ($65). If the device is indeed programmable, then the only foreseeable problems remain with slacking postal employees and criminals who will catch onto the Smart Bell's deception.

When asked about making a quarter of a million pounds, Laurence responded, "Wow, that's a lot of computer games." Indeed it is, but he also plans to invest his money in future education.

This should serve as motivation to all of you crafty DIYers and tech-savvy tinkerers with creative ideas—don't sell yourself short. If you have an ingenious concept, go for it.