Our hacked Kinect series has demonstrated amply how the Kinect is changing the worlds of business, art, medicine and robotics. But where does it go from here? That will be determined by the thousands of dedicated DIYers out there doing work like you've seen here over the last week.

Do you have any computer programming or electrical engineering skills? Have you been looking for an excuse to learn? Well, Kinect might be the biggest thing to happen in both fields over the last five years. Plus it is cheap(ish). This might be just the excuse you've been looking for. There are a few options for pursuing DIY Kinect dreams:

Remember the 20-year-old Spaniard who won the AdaFruit Open Kinect Drivers contest mentioned in the first piece of this series? The fruits of his labor are OpenKinect. It's an open-source suite of drivers for Linux, Windows 7, and OS X, continually updated by more than 2000 hackers around the world. Their wiki is also an indispensable resource for anyone interested in working with Kinect. Many of the hacks you've seen in this series were created using the drivers, code wrappers, and advice available on OpenKinect. And they're all completely free. If you're feeling adventurous, download the drivers, pick up a Kinect, and get to work! If you need electronics tools, support the people who ignited this movement in the first place: Adafruit Industries' handy online store.

In December 2010 PrimeSense, the Israeli company responsible for much of Kinect's technology, partnered with PC-maker ASUS to form OpenNI. It is a non-profit formed to "certify and promote the compatibility and interoperability of Natural Interaction (NI) devices, applications and middleware." They have released their own set of free open-source drivers, wrappers, and coding tools on their website. Robotics think-tank Willow Garage and game developer Side-Kick have since joined the group, and hopefully broadened the type of work that will come out of it. 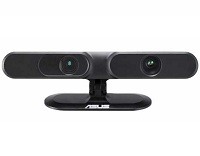 If open-source drivers and a video game peripheral don't seem like serious development tools to you, ASUS now offers help. They recently released the Xtion PRO for sale both online and in stores in Japan. It's basically a Kinect that works directly with a PC, and is designed specifically for developing NI software and Apps. ASUS has even launched a NI-development contest with a $20,000 grand prize! They're also planning to release the WAVI Xtion, a consumer model of the Xtion PRO combined with a WAVI wireless trasmitter. With it, users can stream content from their PC to their TV in HD wirelessly, then control that content via gestures.

There is, perhaps, a third option. The Czech Republic and England have produced an unlikely rival to the Kinect: the Predator. Developed at the University of Surrey in the UK by Czech Ph.D candidate Zdenek Kalal, Predator is a piece of software that implements object recognition and tracking similar to that of the Kinect. It, however, uses a digital video camera instead of sophisticated sensors to provide the input. It does not have the 3D modeling capabilities of the Kinect, but can be implemented more cheaply and widely due to its lack of specialized hardware. Its facial recognition abilities are also scarily acute. Better still, Kalal has made the source code for Predator available for free online.

I eagerly anticipate the rivalry between these two amazing technologies leading to a wave of interface innovation as we've never seen before. Welcome to the 21st Century folks.

Previous: The Revolution of the Hacked Kinect, Part 3: Gaming Gets Artsy

LOL the guy in the video (Zdenek) Added me on Facebook :D or I added him... but he Accepted! :D I wrote that, what he have created is Amazing :D