If an Android is a robot disguised as a human, what is a Geminoid? Similar in concept to the Bruce Willis movie Surrogates, a Geminoid is an Android designed to look exactly like its master, and in this case, Geminoid DK is a facsimile of homo sapien Henrik Scharfe, Professor at Denmark's Aalborg University and Ishiguro's cohort. 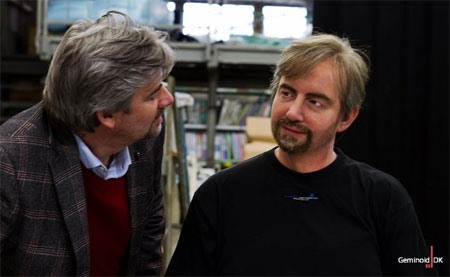 Ishiguro, Scharfe and team are researching "emotional affordances" in human-robot interaction. From the project site, "Geminoid DK will be the first of its kind outside of Japan, and is intended to advance android science and philosophy, in seeking answers to fundamental questions, many of which that have also occupied the Japanese researchers."

The project poses the following questions:

And... How can we make the skin, hair, and movement as eerily realistic as possible? Ishiguro believes that over time he will be able to develop an Android that is indistinguishable from a human, at least in passing. Looks like Geminoid DK is already there.

The future is going to either extremely exciting - or terrifying.

Those movements... are a little robotic.

im with you bro

THAT THING ! ? ...... looks TOO real.
is this Just some BS video
of some guy with makupe on,, faking it ?
the eyes have some bloodshot-ish hue ( looks Human !)
it seems to breath (or at least expand it chest.)
the ''skin" around its eyes seem to fold when it smiles or moves its Jaw.
this is EITHER really advanced mechanics combined with expert anotomical and cosmetic
brilliance . OR just a fruad to sell some product that will be on the market soon.

RUN FOR YOUR FOLKS ! LIVES THEY ARE REAL.
AND THEY ARE EVERYWHERE !
I THINK THEY ARE CIA BLACK OPS ASSASINS.
"Two in the heart, one in the head!

Where can i find about how they build it ?

Will it wash dishes?

Yes, but only if you buy the female version