As a kid, my favorite thing to do at the Natural History museum was a midday stop, when my family strolled past an antiquated looking vending machine in the museum's musty basement. The Mold-A-Rama machine was oddly shaped, George Jetson-esque, and spewed out made-to-order, brightly colored plastic dinosaurs. There was such joy in watching the liquid wax pour into the mold, and then eject a warm, custom toy—well worth the dollar or two demanded.

A version of this tradition was recently elevated to a more technologically advanced level by Spanish collective blablabLAB. In the tourist-packed district of Barcelona's La Rambla, street artists often pose as human sculptures—which raised a question for the group: How could one connect the rituals of spectator-performer, artist-tourist, and observer-object via art and science?

The answer lies in the hacked Microsoft Kinect, coupled with the deep cultural satisfaction of a tourist taking home a souvenir—in this case, not of a dinosaur, but of oneself.

BlablaLAB invited tourists to pose as statues, assimilating as street performers, and then rewarded the participants as consumers when presented with their own free personal souvenir: a small replica of the tourist's figure, generated with a full 360-degree scan using openKinect, and then 3D printed in plastic. 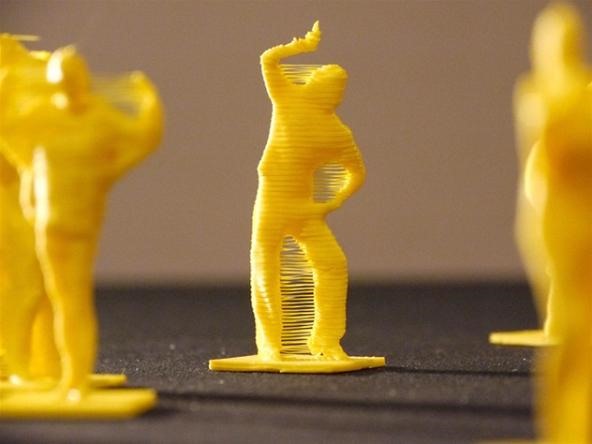 From BlablaLAB, an explanation of the DIY process:

"All the software used in this project is free and open. Custom software has been developed using openFrameworks and openKinect in order to produce a tunable full 360 degree point cloud. Using a midi controller, the three differents input pointclouds (3 Kinects) can be adjusted in space and resolution. The resulting combined point cloud is processed by Meshlab to produce a watertight mesh reconstruction (Poisson reconstruction). Skeinforge takes the mesh, previously cleaned up through Blender (in order to replace the bottom basement, and insert specific structural elements), and outputs a gcode file, which can feed a cnc machine (Rapman 3.1)."

Watch the system work its magic below.

Very Cool Where can I get one?