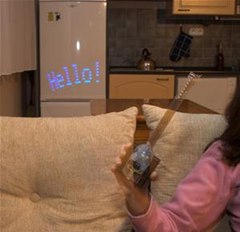 "Csaba Bleuer sent in some pictures and a video of his new creation. It is a LED Wave Display, you just wave it back and forth and text is displayed in mid air.

You might remember the Fan Motor Spinning LED Display of his that we featured here in the past. If you think this device looks similar you would be right, he took the display from the spinning display and mounted a 4 X AA battery holder to it, mounted a small circuit board onto the new device and made a switch that detected motion to the top.

If you would like to make your own Csaba has made the code available."

Check out both of Bleuer's LED wave displays below.