The ZURBLog cleverly demonstrates how to make 3D video in 3 easy steps, using two iPod Nanos, some rubber bands and a yardstick. 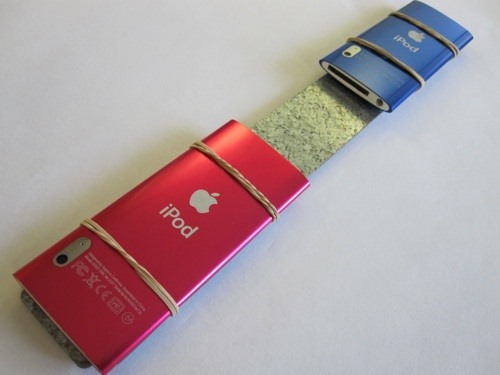 ZURBlog used two Nanos, as aforementioned, but any two identical video cameras will do:

"You need to have the cameras pretty level with each other (think how your eyes work) but don't sweat getting them perfectly aligned, your going to fix that in step two."

Step 2 Record video from both cameras.

Record with both cameras at the same time, and use a Windows app called StereoMovie Maker to create a single video file that has both sources side by side. The software isn't intuitive, so ZURBlog created a workflow to help you out (click through and scroll down to step two).

Be sure to add the tag yt3d:enable=true. (ZURBlog says: "This tells YouTube to combine your two side by side videos into a single 3D video.")

*ZURBlog's results below (So it's not James Cameron caliber. C'mon. After all, it only took 3 steps and two Nanos).

The blurry footage made it hard to make the stereoscopic effect work.